Let's Go Way Back Mr. Peabody-Back To The Future

The terrain beyond the immediate surroundings of the dungeon area should be unknown to all but the referee. Off-hand adventures in the wilderness are made on the OUTDOOR SURVIVAL playing board (explained below). Exploratory journeys, such as expeditions to find land suitable for a castle or in search of some legendary treasure are handled in an entirely different manner.

And so begins the first instance I know of of 'kit bashing' an rpg game system, and the original at that. The product mentioned above is this: 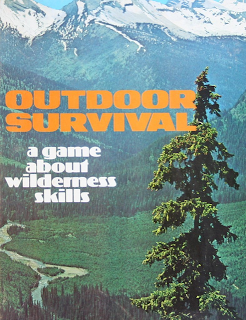 This game produced by Avalon hill was mentioned as “recommended equipment” in the original Dungeons & Dragons boxed set. Two of the three books in the set reference this game as needed for wilderness encounters (see picture below). The game was the best-selling title in Avalon Hill's history. The connection to D&D being a factor most likely. Outdoor Survival was first sold in 1972 and continued to be produced through 1985. It was often sold in National Park gift shops as well as the hobby stores.

Outdoor Survival is a game of wilderness survival skills. Lost and alone, you must survive and escape all that Mother Nature has to offer. With 5 different scenarios from inexperienced hikers lost in the woods to a rescue party trying to find a lost person. You will have to deal with animals, weather, finding food, water, and surviving sickness to prevail.

The Boxed set contains the following:

• 23-page digest-sized booklet, titled "a primer about WILDERNESS SKILLS for players of the game -- OUTDOOR SURVIVAL"

• one six sided dice is required to play

This game is great in and of itself and for anyone who hasn't heard of it it makes a nice addition to an OD&D collection for a taste of how gaming was borrowing in the beginnings from its surroundings.

This was how I learned to game...borrow bits and pieces from everywhere-I remember even having an old style sand 3 minute egg time (a miniature hour glass) that I would drop in the middle of the table when a major time sensitive action would occur (getting everybody to climb up to a window to escape an Orc raiding party was an excellent use for it).

Do you know of any items like this, sanctioned or otherwise, that were used in the early days or that you use even now? Post them in the comments.

(Edit: I'm going to go ahead and include this in my BUILDING YOUR BOOKSHELF series. It just seemed a natural. :)
Posted by x at 11:42 AM

Email ThisBlogThis!Share to TwitterShare to FacebookShare to Pinterest
Labels: BUILDING YOUR BOOKSHELF
Newer Post Older Post Home
(Part of the CRoA Network - http://www.classicrealmsofadventure.com )
"To me the Old School Renaissance is not about playing a particular set of rules in a particular way, the dungeon crawl. It [is] about going back to the roots of our hobby and see what we could do differently. What avenues were not explored because of the commercial and personal interests of the game designers of the time."
Rob Conley, Bat In The Attic