I was flipping through old issues of White Dwarf last night when I came to a realization. When I all but stopped gaming in the mid '80's it wasn't because the market had turned just as I opened a shop and nearly ruined me financially.

And it wasn't because the Brits didn't have their act together. These days you see the Fiend Folio being called 'a waste of paper' and 'toilet paper', that the material coming from White Dwarf and Games Workshop weren't a good 'fit'.

I am on the exact opposite end of that opinion. Fiend Folio was the one book I would keep out of all of them, along with the DMG and PHB, if forced to choose only 3.

The thing that really hit me last night was the issue of WD that contained the Necromancer. During the same time period on the U.S. side Dragon magazine was covering 0-level cantrips, thief-acrobats, jesters. It felt like Dungeons and Dragons was being turned into Clowns and Circuses.

I recall the old Men Without Hats video for their song Safety Dance and remembered the little guy running along with the singer. THAT was what I felt D&D was becoming.

Our gaming had always been on the dark side. High mountain country, cold that could kill you from exposure, mad wizards concocting the destruction of...something...all the time, old fallen empires, dungeons loaded with long lost treasures and monsters so lethal you dare not breathe the same air.

And then all of a sudden we're at the Renaissance Fair? I don't think so.

I have great respect for the forefathers of this hobby. Without them we have nothing. But I felt Gygax was trying to turn D&D into something else. Was it pressure from parents because more young people were playing? Was he just tired of the same crawls? Did he want to create something completely new, but was forced to shim it into D&D because that was the money vehicle?

I have yet to get a clear fix on that part. I just know that very little was making sense that was being proposed (of course with exceptions-the barbarian was a good idea, but felt like it needed its own setting...like Conan maybe, but that didn't seem to work out to well either).

I'm enjoying watching various ongoing projects that are trying to create an AD&D2e based on the direction that Gygax seemed to be going, but I think I've eaten enough drumsticks and watched enough jugglers and clowns.

No offense to those working these projects. As an experiment it is fascinating, but really brings back bad memories of the evolution of the system and what would lead to the modern versions of the game and why I have little interest in it (but we did get the d20/OGL out of it, so it's not all bad. :)

Is It Safe To Play?

Which Would You Rather Play? 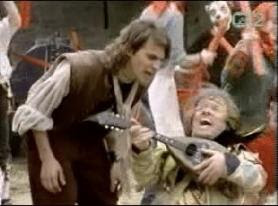 Email ThisBlogThis!Share to TwitterShare to FacebookShare to Pinterest
Newer Post Older Post Home
(Part of the CRoA Network - http://www.classicrealmsofadventure.com )
"To me the Old School Renaissance is not about playing a particular set of rules in a particular way, the dungeon crawl. It [is] about going back to the roots of our hobby and see what we could do differently. What avenues were not explored because of the commercial and personal interests of the game designers of the time."
Rob Conley, Bat In The Attic